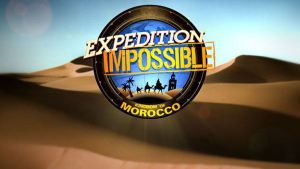 My name is Jim Vaglica. I’m a full time Police Patrol Sergeant in Waltham, Massachusetts and I’m on call 24/7 with a regional SWAT team. I was captain of Team Cops on Mark Burnett’s Expedition Impossible, which aired on ABC during the summer of 2011.

How did you get cast to be on Expedition Impossible on ABC?

I applied to Survivor and was interviewed for the show but I wasn’t cast. I was also interviewed for Big Brother and several other reality shows. Some months later I got a call from one of Burnett’s people stating he saw my video and he wanted to know if I was interested in a new show he was casting.

How did The Cops come together?

Burnett’s casting director said he wanted me to put together a team of Boston area cops. I had to come up with two cops that I thought would be valuable to the team. My first choice was Rob. We’re friends and we get along well. He’s also a carpenter and having someone that can build and fix things would be an asset. He’s an outdoor guy that knows about camping and canoeing. After I had him on board I thought it would be a great idea if we had a female on the team. I thought the producers would like it. Rob knew who I was thinking of. I didn’t even have to say her name. Dani had been in the military and has always been one of the guys. She’s cute and in good shape. She’s also friendly and funny and I knew we could all get along.

Do you feel The Cops did your best?

I think we did very well. We watched 8 teams get on that helicopter and leave the show. We were the last team to leave before the finals. We each had our roles on the team. Rob did all the navigating. Dani solved all the puzzles and I was the workhorse. The editors tried to portray us making mistakes so that our “getting lost” in the ninth episode would all seem to fit. That’s a story I can’t get into.

What was your favorite challenge to do? And why?

I would have to say skydiving was my favorite challenge. We got a clue that said “head to the airport for a one way trip.” Our first thought was skydiving but then I thought maybe it was bungee jumping because they can’t just throw us out of an airplane with no training. Then I realized we were in Morocco and all those silly rules about safety don’t apply. They just strapped me onto an instructor and we got on the plane. I wasn’t nervous until the door opened. The plane became freezing cold in an instant. We jumped out and started to tumble. I thought to myself “this sucks!” I don’t even like roller coasters. The instructor leveled us out and then it was just an awesome rush. We fell for 50 seconds and the wind was deafening. When he opened the parachute it felt like I was being pulled up super fast then everything stopped and it became very peaceful as we glided back to Earth.

What did the teams do when there was nothing to do?

Sometimes we would get to camp in the evening. At that point we just wanted to eat and crash. On days that we got to camp in the afternoon we would hang out and get to know the other teams. Some of the teams didn’t like each other but we got along with everyone, especially No Limits, the Gypsies and Fab 3.

EXPEDITION IMPOSSIBLE – “I Don’t Know How to Ride This Thing!” – The remaining teams encounter crazy camels and a disorienting sandstorm while racing through a Moroccan river canyon. Meanwhile, Lindsey has a close call, and Mackenzie has a breakdown, on “Expedition Impossible,” THURSDAY, JULY 7 (9:00-10:00 p.m., ET) on the ABC Television Network. Adventurer, zoologist, big cat trainer and all around risk taker Dave Salmoni hosts the show. (ABC/GILLES MINGASSON)
JIM VAGLICA, ROBERT ROBILLARD, DANI HENDERSON

Give me a story from the taping of the show?

There are plenty of stories I can’t tell but here’s a few I can:
On day two the crew screwed up and I felt my team took the worst of it. We all ended up in a small village in the desert. I needed to vent and unfortunately for him I saw Mark Burnett in front of me. I got in his face with my grievance and he said “what do you want me to do about it?” I had no answer so I said “nothing Mark, nothing.” To my surprise he responded “then stop whining and get back to the race.” This only infuriated me more so rather than punching the Executive Producer I decided I should just walk away. I spun around to find a little girl from the village standing in front of me holding up hand made dolls. She didn’t speak English but it was obvious she wanted me to buy them. I now had to bury my anger and try to explain to her that I had no money (the crew held all our valuables.) Suddenly, Burnett jumps in and says “here, here I’ll buy it for ya.” He pulls out a big wad of local money and gives her some bills. He takes a doll and hands it to me and says “give it to your daughter.” I ended up losing the doll somewhere along the way.

At the end of six straight days of racing I was laying in my tent. A team, that shall remain nameless, was right next to me. I could hear one of the guys complaining that his thighs were cramping up. I knew what that meant. He was dehydrated. Within two minutes he was screaming in pain. He didn’t realize what was happening to him so that lead to a panic attack which lead to him hyperventilating as well as screaming. We always had a full medical staff close by so a doctor showed up and got him under control but most of the cast and crew thought he was dying.

What was the best part of being on the show?

The best part of the show was the experience. We had a crew of 400 spending millions of dollars so we could play a giant game. Each day was a mystery as to what adventure was ahead of us. I fit almost a lifetime of experience into one month.

What was the worst part of being on the show?

The worst part of being on the show was the fact we had no contact with our families or the outside world. As soon as we got to Morocco the crew took our cell phones, cameras, wallets and passports. I didn’t speak to my wife or kids for almost a month. The other sucky thing was that we were dirty the entire time. We slept on dirt and bugs and wore the same clothes. A few times the crew set up an outdoor “shower” that squirt dirty water on you while you stood in mud. One day my teammate Rob used an ankle deep stream to take a bath. He stood there bare ass splashing water while some local women laughed at him.

How long did the show take to do?

We got to Morocco and we had 3 days of orientation and training. Once the race started you lived outside until your team was eliminated. Almost every stage took two days. My team was in the race for 18 days. We then waited at a resort for 2 days until the final teams finished the expedition.

What do you do now?

I’m still working full time as a Police Patrol Sergeant. I’m also still on call 24/7 with a regional SWAT team. I’ve been a Strength and Conditioning Specialist and I run my own fitness website www.JimVaglica.com. I’ve started writing fitness articles and have been published on BodyBuilding.com, Labrada.com and a bunch of other sites. I’ve been sponsored and I competed in six “tough” races in 2012. I was invited to several Reality Charity events and I’ve met some great people from a lot of other Reality shows. I was flown to L.A. as a finalist on a new reality show that’s currently on hold.

Thanks for the interview. I hope you found my responses interesting. I would welcome any friend requests on:

One Giant Set to Giant Arms

One Giant Set to Giant Arms Informed bodybuilders have always known the importance of the eccentric, or negative portion of a rep. This is where a lot of the micro damage occurs within the muscle tissue. Damage that will be … Continue reading →

The One & a Half Rep Intensity Technique

Increase Your Intensity 150% with the One & a Half Technique Once you’re past the beginner stage of your resistance training life you’re bound to hit some plateaus. This is a good place to add some intensity techniques like super … Continue reading →

This entry was posted in Training Tips, Uncategorized and tagged expedition impossible, Health and Fitness Interview. Bookmark the permalink.